More good causes and community projects will be helped in the future as a new ‘forever fund’ has been created for the South Downs National Park.

To kickstart the endowment, Southern Co-op has donated £10,000, together with £100,000 from the Trust and £100,000 of match-funding from the South Downs National Park Authority.

With a clutch of other donors, the community fund is starting out at £290,000 and is expected to grow into the millions over the next decade, allowing more projects to benefit from grant funding.

Endowments are a simple but effective way for charities and not-for-profit organisations to ensure steady, long-term funding. They are a charitable investment account in which the contributions are invested to generate interest income, and only the interest income is spent.

The Trust’s endowment will provide a permanent funding stream for the National Park’s Sustainable Communities Fund (SCF). The initiative has been running for several years and helped a range of projects, including Butser Ancient Farm in Hampshire, Petworth Community Garden in West Sussex and arts charity Patina Lewes in East Sussex. Funding from the SCF helped to replace an unsafe bridge at Botany Bay, a chalk valley near Duncton, West Sussex, and build a new outdoor learning shelter to help open the site up to local primary schools.

Doug Jones, Chair of the SCF Grant Panel, explained: “This special landscape is dependent on volunteers who give their time and support but often lack funds.

“So we’re excited to be launching this unique fund which will give grants to enable their support to go further.

“Until now the Sustainable Communities Fund has relied on piecemeal donations. In a climate where charity funding is never guaranteed, this initiative provides a dedicated and dependable income stream to support community projects in the National Park. In short, it gives SCF a sustainable future.”

And Doug added: “We plan to build the endowment over time and support more projects that help the environment.

“This is an exciting time for the Trust as we approach the 10th anniversary of the National Park and we’re looking forward to the positive long-term impact this new community fund will have.” 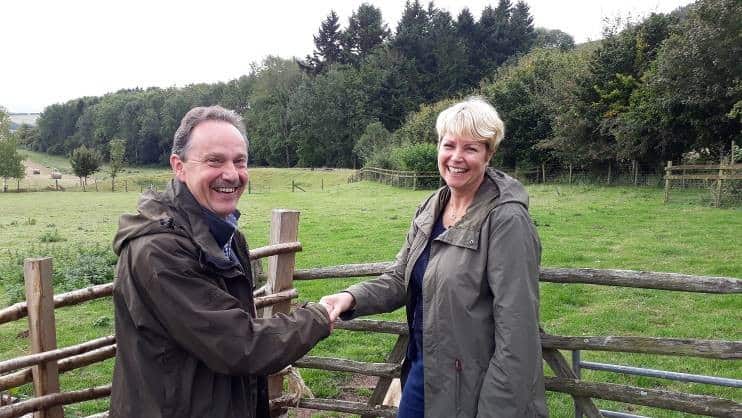 Doug Jones, Chair of the Sustainable Communities Fund Panel, and Gemma Lacey, Director of Sustainability and Communications at Southern Co-op.

Gemma Lacey, Director of Sustainability and Communications at Southern Co-op, said: “Our co-operative was formed just a few miles outside of the South Downs National Park almost 150 years ago for the benefit of the local community. As England’s newest national park, we are privileged to be part of its preservation. We hope this donation to the community fund will enable it to continue to thrive for years to come and for many generations to enjoy.”

Butser Ancient Farm in Hampshire received SCF grant funding to help transform its Roman Villa, which is based on archaeological excavations of a 4th century Roman home at Sparsholt, near Winchester. Volunteers spent more than 1,000 hours painstakingly recreating a mosaic from Sparsholt using more than 120,000 multi-coloured tiles. 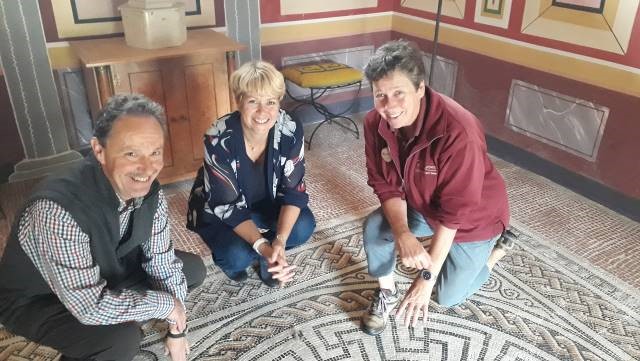 Maureen Page, Director at Butser Ancient Farm, said: “This funding has made a huge difference to the Roman Villa and it now feels like visitors are stepping back in time to see first-hand how the Romans would have lived in Britain. We have more than 35,000 schoolchildren visiting every year and this authentic Villa is helping them to learn more because it brings archaeology to life.”

Grants awarded by the SCF are considered by the SCF Grant panel, which meets two times a year. The next meeting is on September 24 and there is a grant application deadline of August 26. Grants are available for up to 50 per cent of the project cost from £250 to a maximum of £10,000. Any organisation interested should email mark.rose@southdownstrust.org.uk or call 01730 819219 for an initial conversation about the project.

About the Sustainable Communities Fund:

Any partnership or other not-for-profit organisations which include social enterprise, community interest companies, voluntary organisations and ‘for profit’ organisations (these projects cannot be for financial gain to the business) can apply for funding if they believe their project is bringing social, environmental, economic or cultural benefits to a community within the National Park.

Applications are considered by the Grant Panel, which consists of 10 people from various sectors of the South Downs. It includes two National Park Authority Members and individuals with a variety of expertise and backgrounds. Application forms are not available for download as we encourage an initial conversation about your project – please contact the External Funding Co-ordinator on 01730 819219 or grants@southdowns.gov.uk

The Trust is an independent charity and its aim is to work with partners to enhance and protect the South Downs National Park for future generations.

The Trust is governed by an independent and experienced board of trustees who oversee its work.

Southern Co-op (southernco-op.co.uk) is a large, regional independent co-operative operating over 250 food and funeral branches across the south of England. Owned by its 140,000+ members, it has an annual turnover of over £450m and more than 4,000 colleagues.

Southern Co-op’s sustainable business approach underpins a commitment to providing a fair, fresh approach, for all. This is manifested through fundraising for local charities, supporting environmental and community owned organisations and working with local food producers.